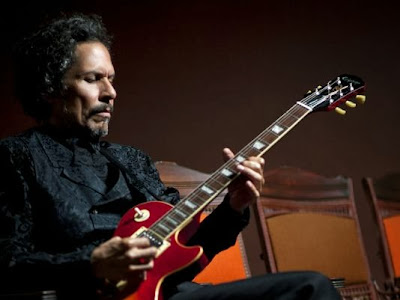 The son of R&B royalty Johnny Otis, singer-songwriter Shuggie Otis made a name for himself in the hippie era through works like his psychedelic hit "Strawberry Letter 23." He even was invited to join The Rolling Stones at one point, though he turned down the offer.

Then he proceeded to all but disappear for the better part of four decades, declining to release music and making few public appearances. Blame a combination of record-label disinterest and stage fright, he says today. Thankfully both barriers were overcome in the past year. Epic Records finally reissued Otis' classic 1974 work, Inspiration Information

, and he began performing at venues like the Echoplex and El Rey in Los Angeles.

After years of sampling by prominent hip-hop acts like OutKast, Otis' music sounds more relevant than ever, and he's finding audiences. Here's hoping that Shuggie's time in the limelight lasts as long as his years in obscurity. source

Posted by CDMartini at 9:48 AM