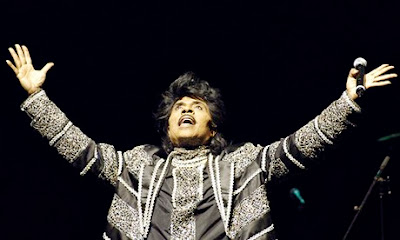 Saturday night (September 29, 2013) in Atlanta, Little Richard joined Cee Lo Green onstage for a Recording Academy fundraiser, where the topics ranged from MC Hammer to the Ten Commandments and pancake makeup. The two also talked about a recent health scare.

Little Richard revealed that he recently suffered a heart attack. The 80-year-old rock'n'roll originator divulged that he had almost died in Nashville about a week before.

"The other night, I didn’t know I was having a heart attack," Little Richard admitted to the crowd... "I was coughing, and my right arm was aching. I told my son, 'Make the room as cold as ice.' So he turned the air conditioning on, and I took a baby aspirin. The doctor told me that saved my life..." MORE HERE & HERE

Posted by CDMartini at 9:37 AM