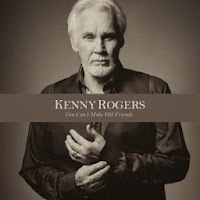 Three decades after their unforgettable team up on "Islands in the Stream," Kenny Rogers and Dolly Parton have a new duet out on Rogers' latest album.

The title song from "You Can't Make Old Friends

" (above) shows once again the special chemistry he and Parton have.

The releaseof the new album kicks off an eventful month for the 75-year-old Rogers. He'll be inducted into the Country Music Hall of Fame on October 27, 2013. source