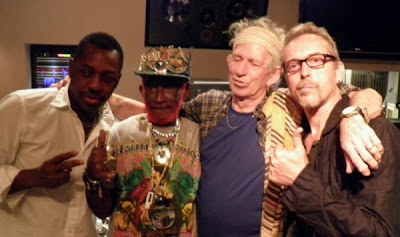 Keith Richards has been busy cutting tracks with long-time collaborator, drummer and producer, Steve Jordan (above left) for an upcoming solo effort. It has now been revealed that Keith was laying down some tracks as recently as September 23, 2013 at Germano Studios in Manhattan.

According to State of Emergency, Keith wanted Lee ‘Scratch’ Perry to mix a track for the new solo album; Keith had played guitar on several of State of Emergency’s productions for Lee Perry, including the Grammy nominated album ‘Revelation

’. So ‘Scratch’ was keen to return the favour.

The two collaborated on a version of 'Prisoner of Lonelyness' by Willie Williams. source
Posted by CDMartini at 9:26 AM