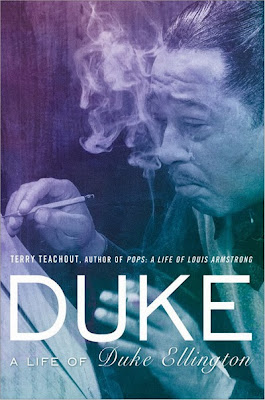 If American music had a Mount Rushmore, Duke Ellington surely would be on it.

Ellington (1899-1974) helped raise jazz to the status of art, putting together bands that defined the American soundtrack for a generation, stretching and teasing popular music in directions that spoke to audiences around the world.

But he's always been a little hard to figure. He's one of America's greatest composers, but he became so by appropriating others' music — and taking all the credit. His public persona was sophisticated, but his private life was a mess.

In Duke: A Life of Duke Ellington

, cultural critic Terry Teachout sets out to untangle the contradictions surrounding the life and music of the jazz genius. By Teachout's own admission, he doesn't exactly decode the Duke — the man was never candid enough to honestly reveal himself — but "Duke" does provide rich context for the story of one of America's singular artists. MORE HERE
Posted by CDMartini at 9:26 AM