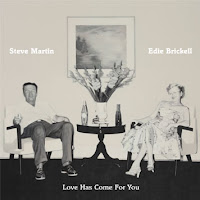 Back in the late 1950s and early 1960s, Steve Lawrence and Eydie Gorme were household names and stars on television and in popular music. Now there’s a new Steve and Edie – Steve Martin and Edie Brickell — teaming up to make music.

Their collaboration, Love Has Come For You, was released April 23, 2013 by Rounder Records. It isn’t bluegrass, but it has something of an old time feel.


Anyone interested in Steve’s work with the Steep Canyon Rangers, banjo picking or the collaborative work of songwriters will find a lot to like here. Anyone who remembers Edie as a new wave pop rocker will be in for a surprise. She passes for a country girl quite nicely, thank you. MORE HERE
Posted by CDMartini at 7:37 AM