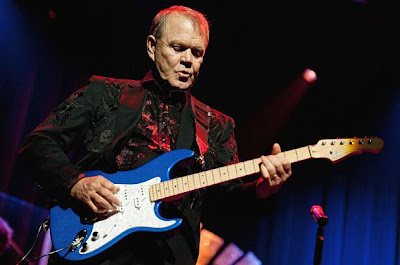 Though Glen Campbell's Alzheimer's disease has progressed too far for him to remain on tour, the veteran singer is planning a followup to his 2011 album Ghost on the Canvas, which he had intended to be his last recorded work.

Campbell will release See You There on August 6, 2013 on Surfdog Records. The new album features re-imagined versions of hits like "Wichita Lineman," "By the Time I Get to Phoenix," "Rhinestone Cowboy" and "Gentle on My Mind," and was recorded during the same sessions that yielded songs for Ghost on the Canvas. MORE HERE
Posted by CDMartini at 8:10 AM

Email ThisBlogThis!Share to TwitterShare to FacebookShare to Pinterest
Labels: by the time i get to phoenix, gentle on my mind, ghost on the canvas, glen campbell, rhinestone cowboy, see you there, wichita lineman