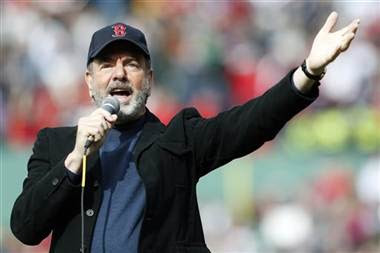 Neil Diamond will donate royalties from his song "Sweet Caroline," which has been played at every Boston Red Sox home game for more than a decade, to the One Fund Boston, the singer said on Wednesday April 24, 2013.

The song was downloaded more than 19,000 times this week, with sales up 597%, according to Nielsen SoundScan.

Diamond was at Fenway Park on Saturday April 20, 2013 to lead the crowd in what has become a stadium tradition of singing the tune during the break in the eighth inning before the Sox come to bat.
Posted by CDMartini at 9:52 AM