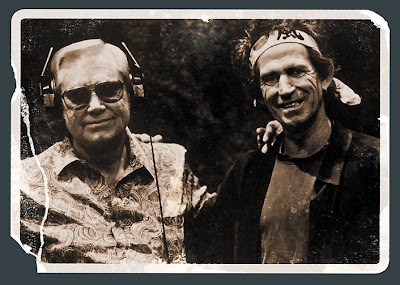 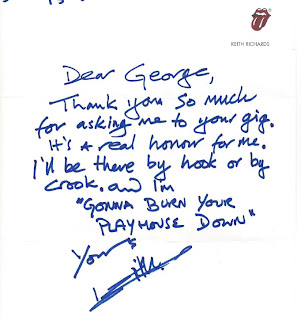 George Jones was set to play his final show in Nashville November 22, 2013. The concert was to be the culmination of the 81-year-old’s farewell tour The Grand Tour, named after one of his most popular songs. The list of artists set to participate was dozens deep and included Garth Brooks, Kid Rock, The Oak Ridge Boys, The Charlie Daniels Band, Dierks Bentley, and Cyndi Lauper .

The concert sold out of its 15,000 tickets quickly and was shaping up to be one of Nashville’s biggest events of the year.

After the king of country music’s passing on Friday morning April 26, 2013, the fate of that concert is undecided.

Well, it looks as if Jones had even bigger plans for the evening than the public realized. A hand-written letter from The Rolling Stones’ Keith Richards was provided to The Tennessean in which the famed guitarist said he would be at the show “by hook or by crook.”

Posted by CDMartini at 7:43 AM