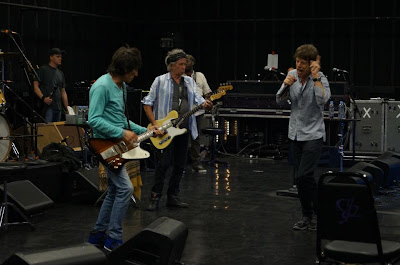 Rolling Stones fans from the Los Angeles area got some satisfaction Saturday night (April 27, 2013) when the legendary rockers played a surprise show at a small venue.

Tickets for the sold out show at the Echoplex in Echo Park were $20 apiece, a fraction of what tickets to their "50 and Counting" tour will cost when it launches May 3, 2013 at Staples Center where the lowest-priced tickets were going for $250 each.

Hundreds of fans lined up outside the El Rey Theatre earlier Saturday for a chance at the tickets, which were dispensed through a lottery system. Buyers were limited to one ticket, and were required to show a government-issued ID, pay with cash, wear a wristband with their name on it and be photographed. Their names were verified at the Echoplex, which has a capacity of about 700. MORE HERE & HERE

Posted by CDMartini at 9:44 AM