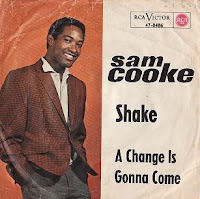 A Change Is Going to Come, one of the most important songs of the civil rights movement, was written by Sam Cooke in 1963 and recorded by him in 1964. Since that time, nearly 500 versions of the song have been recorded by artists from Aretha Franklin to Jon Bon Jovi.

The anthem will receive the Songwriter's Hall of Fame's Towering Song Award at their 2013 ceremony in June (2013). The award is given to "the creator(s) of an individual song that has influenced our culture in a unique way over many years." source
Posted by CDMartini at 8:58 AM