The Kindness of Lars Ulrich 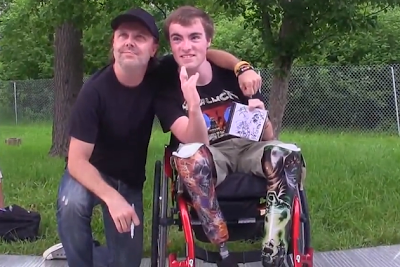 Metallica drummer Lars Ulrich has been called every name in the book, both positive and negative, since Metallica began thrashing in 1981. However, even Ulrich’s biggest critics couldn’t possibly slam him after watching a recent interaction between the drummer and a disabled Metallica megafan during the 2013 Orion Music + More Festival.


During a festival meet-and-greet, Ulrich walked up to a wheelchair-bound fan with the most “heavy metal” prosthetic legs ever. Ulrich spoke to the fan, who also is an aspiring drummer, for a good while before signing one of the young chap’s prosthetic legs. As an even greater act of kindness, Lars even invited the fan to hang out onstage with Metallica so he could see Ulrich’s drumming up close and personal. MORE HERE
Posted by CDMartini at 10:29 AM