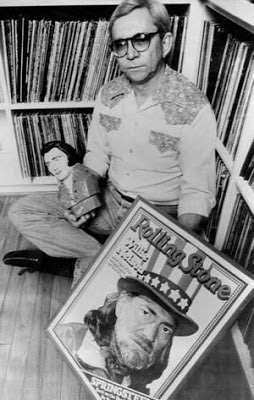 Chet Flippo, one of the deans of pop music journalism, whose profiles of artists like Dolly Parton, Willie Nelson, Waylon Jennings and Tanya Tucker for Rolling Stone magazine in the 1970s heralded vast new popularity for country music among broader audiences in the United States, died last Wednesday (June 19, 2013) in Nashville. He was 69.

But in an era of rock celebrity mania, he also insisted on writing about a more down-to-earth musical form, still referred to in the early 1970s as “country and western,” which he had grown up with as a boy.

In 1972, Mr. Flippo wrote about a longtime country singer who had “generally been overlooked,” and who was “probably the most underrated writer in America today,” Willie Nelson. Mr. Nelson had written hits for other singers, but would not have a major hit of his own for a few years more.

Flippo was there when Willie and Waylon brought the rednecks and the hippies together in Austin. He penned the liner notes for Wanted! The Outlaws