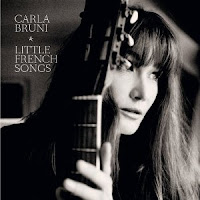 Ella Fitzgerald was known as the First Lady of Song, but is the singer-songwriter of first ladies.

". In 2008, she married Nicolas Sarkozy, then president of France, and became literally a rock star first lady.

Now, with Sarkozy out of office, Bruni has released a new album, Little French Songs