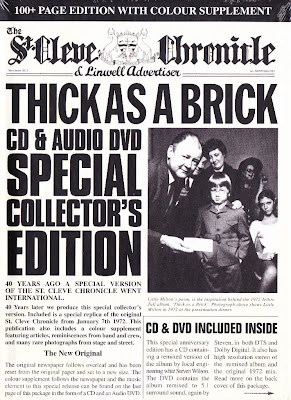 This special edition set features the original album on CD and in a remixed version on DVD with 5.1 surround sound along with a recreation of The St. Cleve Chronicle newspaper in which the album was first packaged 40 years ago.

According to group leader Ian Anderson in the packages' liner notes, "Thick As a Brick" was written and recorded as a response to the assumption that the band's previous album "Aqualung" was a concept record. Thus, Anderson crafted an epic-length work consisting of one 45-minutes song divided into two parts. Furthermore, he concocted a fictitious story in that the work was based on a poem written by a young boy named Gerald "Little Milton" Bostock.

"Thick as a Brick" remains one of Tull's best works, and earlier this year, Anderson released a sequel ("Thick As a Brick 2") under his own name. MORE HERE