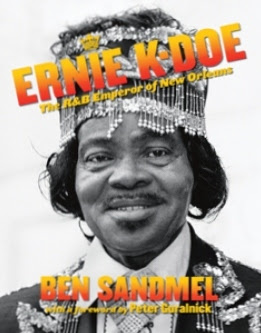 Even in a city known for its eccentrics, Ernie K-Doe was in another dimension. The New Orleans musician always knew — and said, loudly — that he was special.

The man born Ernest Kador sometimes claimed he wrote "Mother-in-Law" — but he claimed a lot of things. In fact, Allen Toussaint composed and produced the song, and, after a few unsatisfactory takes, literally threw it away. It was rescued from oblivion by one of the backup singers at the session.

The song was dismissed as a danceable novelty. But Ben Sandmel, author of the new biography Ernie K-Doe: The R&B Emperor of New Orleans, says it was deeper than that: angry, and smoldering.

Book Available HERE
Posted by CDMartini at 8:28 AM