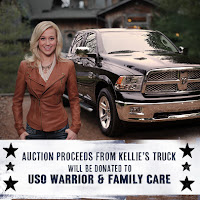 All five participating artists received a lease on a 2012 Ram 1500 Laramie Longhorn truck. Each truck will be auctioned off in early 2013 with all proceeds going to benefit a charity of each artist's choice.

The auction will kick off January 22, 2012 with Kellie Pickler's truck and the proceeds will go to Kellie's charity of choice, the USO. MORE HERE
Posted by CDMartini at 9:22 AM