Back In: Black Crowes 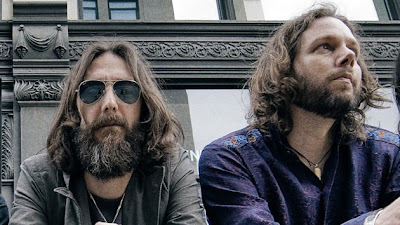 The Black Crowes are to end their hiatus with a spring 2013 tour of the UK and US.

The band announced the first leg of their 'Lay Down With Number 13' world tour on their official website Thursday December 26, 2012. Additional dates will be announced soon.

The band's line-up for the tour will comprise Chris Robinson (above left), Rich Robinson (above right), Steve Gorman, Sven Pipien, Adam Macdougall and new recruit Jackie Greene, who joins on guitars and vocals.


The band has also announced the March 19, 2012 vinyl release of the live Wiser For The Time. Its mammoth eight sides on four vinyl albums will contain 26 songs - 15 acoustic and 11 electric - from the band’s five-night, sold-out NYC performances in the fall of 2010. These never-released-before versions will also be available as a double album digital download.

As a Christmas gift to their fans, the band is offering a free mobile web app via their website. It includes a free download of the acoustic version of 'Under A Mountain' performed live in NYC in 2010. This offering is exclusive and not included on Wiser For The Time. Download it HERE

Posted by CDMartini at 9:49 AM