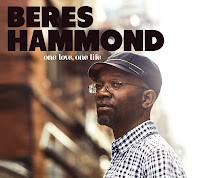 Beres Hammond has never been one of reggae’s most recognizable artists internationally but, in the singer’s native Jamaica, he enjoys an iconic status just a few notches below that of Bob Marley.

A specialist in intimate love songs often told from the viewpoint of the blue-collar, "common" man, Hammond has been described as his country’s Marvin Gaye, and also its Springsteen.


At age 57, the crooner has just released one of the best albums of a four-decade-long career. Issued in November 2013 by VP Records, One Love, One Life is a double-disc set that breaks down between romantic (One Love) and more socially conscious fare (One Life). MORE HERE

Available HERE
Posted by CDMartini at 10:59 AM