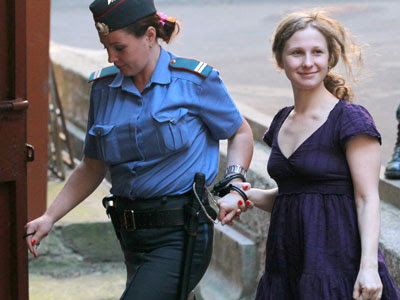 Jailed member of Russian punk band Pussy Riot, Maria Alyokhina, has been transferred to solitary confinement because of tensions with other inmates.

The singer was jailed for two years in August for performing a crude anti-Kremlin song in Moscow's cathedral.

Another band member, Nadezhda Tolokonnikova is also in jail.

The court's decision to sentence the women to two years each in remote prisons in eastern Russia was widely condemned. MORE HERE

Sign the petition HERE
Posted by CDMartini at 8:22 AM