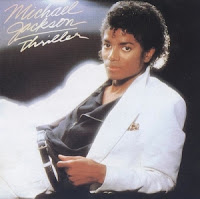 Thriller went places pop music had never gone before: A 14-minute music video that all but obliterated MTV's color line. The moonwalk dance craze. The Van Halen-infused "Beat It" guitar riff. The zombie line-dance that supplanted the hokey-pokey at cheesy wedding receptions for decades to come. MORE HERE


We must admit, we were just as mesmerized as everyone else ...
Posted by CDMartini at 8:33 AM