Nick Cave & The Bad Seeds Will Push the Sky Away 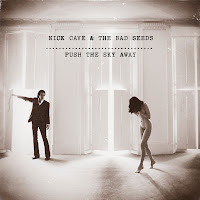 Nick Cave & The Bad Seeds 15th studio album together, Push the Sky Away, to be released February 18, 2013 in the UK and the following day in the U.S.

This is the first Bad Seeds album since 2008′s Dig!!! Lazarus Dig!!!,  though Cave has remained prolific scoring films and working with his other band, Grinderman. MORE HERE