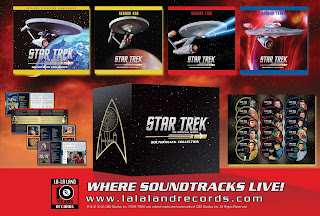 By now, 46 years after the original series' September 1966 debut, one might imagine that every conceivable aspect of "Star Trek" lore and memorabilia has been mined and merchandised.


Not quite. Next week, Burbank-based film-music label La-La Land Records will release a 15-CD boxed set of music from the original "Star Trek" series: every note that was written and recorded for the sci-fi drama, more than 17 hours of music in all and retailing for $225. MORE HERE

Join La-La Land Records as it marks its 10th anniversary with the release of the STAR TREK: THE ORIGINAL SERIES SOUNDTRACK COLLECTION at the historic Egyptian Theater in Hollywood, CA on December 3, 2012, at 7:30pm. MORE HERE
Posted by CDMartini at 7:35 AM