The Touching Story of Sweet Lorraine 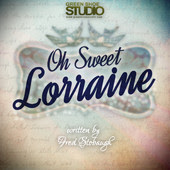 This short documentary tells the touching story of how a song written by a 96-year-old pensioner became an online hit, just months after the death of his wife of 75 years.

Fred Stobaugh, who admits to having no musical experience, wrote the song in one evening and entered it in a competition searching for YouTube videos by emerging singer-songwriters, along with a letter telling his story.

Unlike other digital entries, Mr Stobaugh sent in a large "manila envelope" to the production company hosting the competition, which caught their attention.

Jacob Golgan of Green Show Studio says “we didn’t expect an entry like Fred’s” but he was so touched by his story that he tracked him down and offered to put his lyrics to music.

The resulting country song, 'Oh Sweet Lorraine', is a poignant tribute to Fred’s wife who, he says in the film “was the prettiest girl I ever saw”. source

It's a very moving story and a gem of a tune ...help Fred by purchasing the song at iTunes.
Posted by CDMartini at 7:45 AM