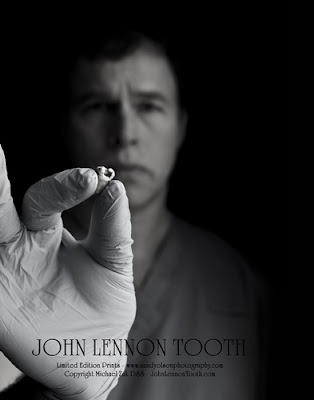 The man who bought John Lennon's molar two years ago – Canadian dentist Michael Zuk – is seeking headlines again, putting out a press release and launching a website indicating his intention to extract DNA from the tooth with the lofty goal of cloning the legendary musician.

At the time of the tooth's sale, it was reported that Lennon's molar was too fragile to be DNA tested to confirm it belonged to him. However, Zuk now contends he has hopes to "fully sequence" Lennon's DNA.

In the mid-1960s, Lennon gave one of his extracted molars to his housekeeper for disposal — but that was just the beginning of the tooth's extremely odd journey. source

Posted by CDMartini at 9:53 AM