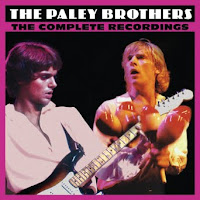 For power pop fans and aficionados of the mid-to-late-'70s Boston and downtown New York scenes, news that at last a CD is coming out containing ALL of the sides the Paley Brothers released on the Sire label would be reason enough for rejoicing. Said CD also contains 11 unreleased bonus tracks drawn straight from the band’s archives. The Paley Brothers: The Complete Recordings


Andy Paley was the lead singer and songwriter for the legendary Boston band the Sidewinders and played with the Modern Lovers, while Jonathan was a member of CBGB’s fixture Mong before the siblings formed the Paley Brothers in 1975. Now, 35 years after the release of their lone album, the Paley Brothers are back with a collection of 26 tracks. source
Posted by CDMartini at 9:56 AM