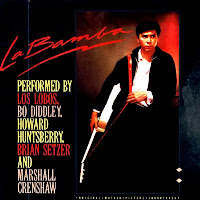 Ritchie Valens hit No. 22 with the song in 1959 just one day before he died in the same plane crash that killed Buddy Holly and the Big Bopper.

' was recorded for the film of the same name.
Posted by CDMartini at 8:12 AM