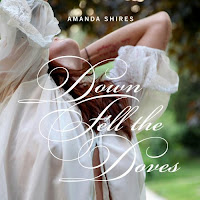 Its hard for many artists to recreate the success of an album, but Amanda Shires latest, Down Fell the Doves

, more than lives up to her 2011 release, Carrying Lightning

. With her signature fiddle solos and her haunting lyrics, Amanda shines as a very original and unique artist. The first single from the album is 'Devastate' (above).

Now based in Nashville, Shires began playing fiddle at age ten in Texas.  By 15, she had joined the Texas Playboys, former backing band of western swing pioneer Bob Wills.