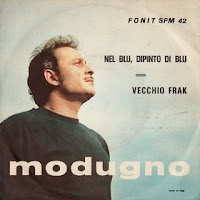 It spent five non-consecutive weeks atop the Billboard Hot 100 in August and September 1958 and was Billboard's number-one single for the year. Modugno's recording subsequently became the first Grammy winner for Record of the Year and Song of the Year in 1958.

Posted by CDMartini at 9:45 AM