Sir Paul Can Reclaim His Own Songs Soon 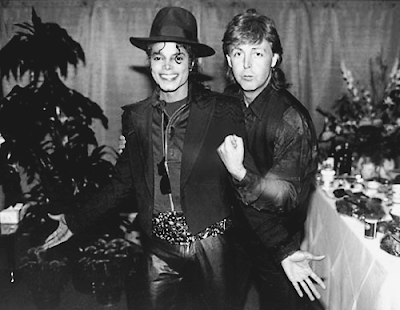 Sir Paul McCartney is set to win back the rights to The Beatles songs.

The veteran rocker, 71, lost ownership of the publishing rights to the songs he co-wrote with late bandmate John Lennon.

Sir Paul was furious when his former friend Michael Jackson outbid him to buy the Associated Television Corporation (ATV)'s back catalog, which includes The Beatles' tracks, in 1985.

Under the US Copyright Act, Sir Paul will be able to claim the titles and earn royalties and licensing money in five years time. The Act means songs written prior to 1978 turn into the property of the songwriter after 56 years, meaning the 71-year-old star will regain the majority of his hits by 2026.

It wasn't too long ago, McCartney complained at having to pay Michael royalties every time he wanted to perform a song. MORE HERE & HERE
Posted by CDMartini at 8:40 AM