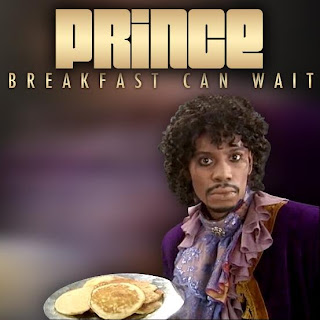 Prince was great at Twitter as soon as Prince was on Twitter. A few days in, and he has already outdone himself...

Prince released a photo of his new single cover late Friday night (August 16, 2013) that brilliantly features Dave Chappelle dressed as the Purple One. Also via @3rdeyegirl's simple "Game: Blouses" tweet, we have the video snippet of "Breakfast Can Wait" (above). MORE HERE

Prince has taken to selling the singles as individual tracks on his website. The full version of "Groovy Potential" is available for purchase for 88 cents. GO HERE
Posted by CDMartini at 9:30 AM