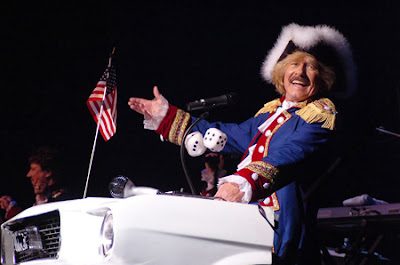 After a couple of days of rumors around the internet, former Paul Revere and the Raiders front man Mark Lindsay has confirmed that Revere (above) is having serious medical issues.

Recent reports say that, during Raiders shows, Revere seemed tired and sat through the majority of the show. It is also said that he has either lost his hair or has shaved his head.

Revere, now 75, first formed the basis of the Raiders in 1958 as an instrumental combo called the Downbeats. When they added singer Lindsay, they scored their first minor hit with Like, Long Hair (1961 / #38) but it would take until 1966 when their career took off with top ten songs Kicks, Hungry, Good Thing and Him Or Me, What's It Gonna Be.  They hit number 1 in 1971 with Indian Reservation. MORE HERE
Posted by CDMartini at 7:31 AM

Email ThisBlogThis!Share to TwitterShare to FacebookShare to Pinterest
Labels: good thing, him or me what's it gonna be, hungry, indian reservation (cherokee people), kicks, like long hair, mark lindsay, paul revere, paul revere and the raiders, the downbeats