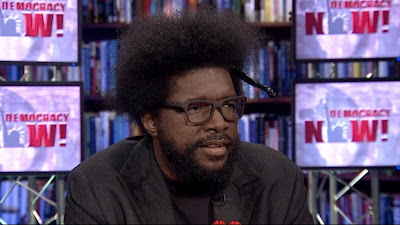 On the heels of this week’s historic ruling declaring the "stop-and-frisk" tactics of the New York City Police Department unconstitutional, Ahmir "Questlove" Thompson of the Grammy Award-winning band The Roots joined Democracy Now's Amy Goodman to talk about his own experiences being racially profiled by police.

Questlove describes the first time he was harassed by police, as a young teenager in Philadelphia, to the most recent: being pulled over in his car by the NYPD two weeks ago, despite being one of the most acclaimed artists in hip-hop. Watch/Listen HERE
Posted by CDMartini at 7:50 AM