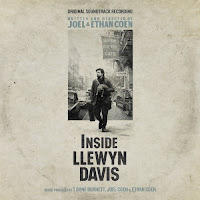 The soundtrack for the new Coen Brothers film Inside Llewyn Davis

The album is produced by T Bone Burnett alongside Joel Coen and Ethan Coen, the same team behind the Grammy Award winning, multimillion selling O Brother, Where Art Thou?

The LP will feature a never-before-released Bob Dylan recording of his song 'Farewell' (above), which was recorded during the sessions for his 1964 album, 'The Times They Are A-Changin'