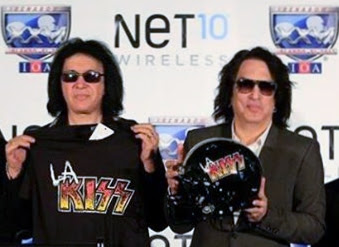 On Thursday August 15, 2013, the Arena Football League announced it was awarding an expansion team to a group of individuals that includes KISS band members Gene Simmons (above left) and Paul Stanley (above right).

The team, called the LA KISS, will begin playing in March (2014) at the Honda Center in Anaheim.

Season tickets, which went on sale Thursday starting at $99, will include a free KISS concert. MORE HERE
Posted by CDMartini at 10:02 AM