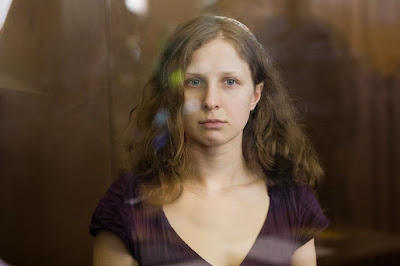 Alyokhina, who had embarked on a hunger strike after being barred by the court from attending her parole hearing, had her request turned down after the court ruled she had disobeyed authorities at the prison in which she was jailed and had not repented for her crime.

Alyokhina and Tolokonnikova were jailed in August 2012 for two years after being convicted of hooliganism motivated by religious hatred. The duo and other members of the Russian punk rock collective staged an infamous "punk prayer" at Moscow's Christ the Saviour Cathedral in protest of Vladimir Putin.

The case has received international attention, and earlier this week, Paul McCartney announced he had sent letters to Russian officials in support of the jailed band members. MORE HERE & HERE

Amnesty International
Posted by CDMartini at 8:58 AM