Carrie Underwood Gets Stoned In Toronto 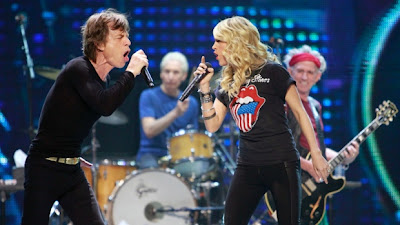 Celebrating a half-century of music, the Rolling Stones defied their age with an energetic, lengthy performance at a roaring Air Canada Centre last night (Saturday May 25, 2013) led by the frenetic antics of nearly 70-year-old frontman Mick Jagger.

Over the course of a roughly two-hour, 15-minute performance, Jagger swiveled his hips furiously as he paced the stage back and forth, strutting and punctuating most every word with his waving index finger extended to the crowd, rarely taking even a brief break from pin-balling about the elaborate stage.

He eventually welcomed former "American Idol" Carrie Underwood for a duet on "It's Only Rock 'n Roll (But I Like It)." At times, the grinning country starlet seemed just as interested in watching Jagger hop and slither about the stage as the thousands of fans packing the stands, just smiling and staring and trying to keep up with his herky-jerky dance moves.

She bowed to each member of the band before departing, and as she left the stage looked to the sky in a gesture of apparent amazement. MORE HERE

Video HERE
Posted by CDMartini at 10:12 AM

Email ThisBlogThis!Share to TwitterShare to FacebookShare to Pinterest
Labels: air canada centre, american idol, carrie underwood, it's only rock 'n roll (but i like it), the rolling stones