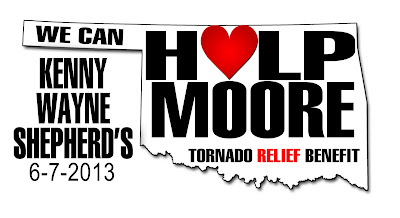 A growing roster of Oklahoma-tied musicians and others are planning benefit concerts, television broadcasts and other events to help raise money for recovery efforts after this week's storms tore through many parts of the Sooner State.

Ada-raised Blake Shelton said he wants to host a telethon-like concert on NBC. Moore-raised Toby Keith told CNN's Piers Morgan that he's been contacted by folks at Oklahoma City's Chesapeake Arena and even stadium officials at the University of Oklahoma about a fundraising concert.

It all struck home for Kenny Wayne Shepherd. With a concert already scheduled for June 7, 2013 at the Diamond Ballroom, Shepherd felt the only way to go was to give all he could. Now, his concert will be a benefit show, “We Can Help Moore,” with all proceeds going to the Regional Food Bank of Oklahoma’s tornado relief efforts. MORE HERE & HERE
Posted by CDMartini at 10:43 AM