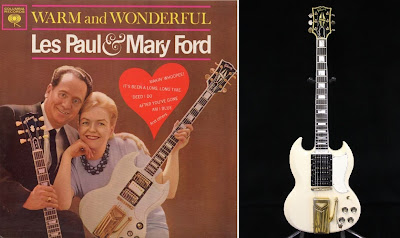 The Les Paul Gibson Guitar (shown) was featured in an episode of History Channel's 'Pawn Stars' where it was bought by Rick Harrison for $90k.

Shortly after the episode airing the purchase from Mary Fords nephew, the Guitar appeared on eBay where it sold for $110,000.

The Guitar, a 1961 Gibson 'SG', was owned by Les Paul’s wife Mary Ford, and was sold with a number of personal items. MORE HERE

It's difficult to tell if the SG on the album cover above is the same guitar, but its close enough to be a possibility.
Posted by CDMartini at 7:12 AM