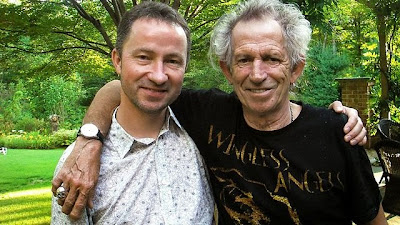 "Paul Sexton interviews the Rolling Stone at his home in Connecticut. Richards is far from guarded in his recent book, but here he's rather vividly relaxed as great tales are mixed with great music."

"Paul Sexton visits Weston, Connecticut - a New York City commuter town whose previous inhabitants include Bette Davis and Eartha Kitt - to talk to resident Keith Richards, who candidly reflects on his colourful life. Topics include fellow Rolling Stone Mick Jagger, controversial moments, memorable encounters, guitar heroes and the first record he ever bought."
I wonder what "rather vividly relaxed" means? Anyway, there's 2 hours of this so BOOK THE DATE.

GO HERE
Posted by CDMartini at 6:05 AM